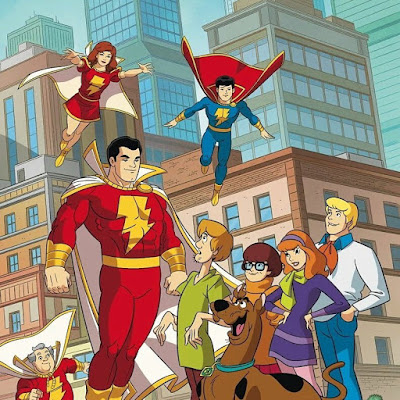 I'm reviewing this issue solely for the Marvel Family appearance. The script, by Sholley Fisch, is typical Scooby Doo fare, but Fisch scores big by creatively making the entire script a primer for the classic Fawcett continuity. By reading this issue, you essentially get the entire history of the Fawcett Marvel Family without even realizing you are being schooled.
E. Nelson Bridwell would be proud. Not only that, but in this issue, you get an appearance by Fawcett era villain Mr Banjo.  I believe this is his first appearance in a DC Comic.  The art, by Dario Brizuela, is very slick and fluid. It doesn't quite match the character designs used for the short lived 1981 Shazam! cartoon by Filmation, nor does it resemble an Alex Toth Super Friends design by Scooby Doo's parent company, Hanna Barbera. It looks like Brizuela was trying to create a unique Scooby Doo design for the Marvels that still was grounded in C.C. Beck's art.  In that, it was very successful, although I noticed Brizuela followed Cameron Stewart's lead in giving Freddy Moe Howard bangs instead of his more traditional Elvis-looking hair.  At least he's not blond. This issue scores an A.
Posted by Shazamaholic at 2:03 PM