My track by track review of The Monkees' new album, Good Times! produced by Adam Schlesinger. It is the group's 12th studio album, and 3rd for the Rhino label. 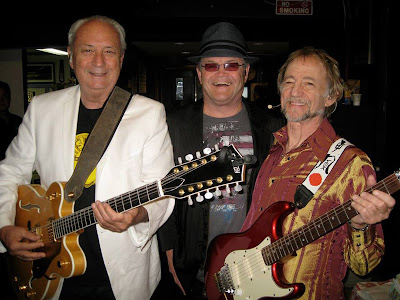 "Good Times" - The album kicks off in a unique way. An old demo by the late Harry Nilsson, produced by Mike Nesmith (who also plays rhythm guitar on the track) is layered with new vocals by Micky, and a new lead guitar instrumental.  The curious choice of letting Nilsson sing the second verse solo instead of limiting his vocal to harmony with Micky might be seen as questionable to those fans who feel the late Davy Jones should have had a bigger presence on the album. But overall, this funky tune gets the album off to a great start.

"You Bring The Summer" - This song, written by Andy Partridge, if you go by the lyrics, seems like it would be more appropriate for the Beach Boys than the Monkees. But musically, it sounds nothing like a Beach Boys song. Sung by Micky with backing vocals by Mike and Peter, the first part of the song is a good example of what Micky refers to as "jangle pop". But then the second part of the song delves into a psychedelic fade out reminiscent of  "Auntie's Municipal Court", a Monkees track from 1968. This is a great Summer hummer and should become an annual Summer anthem.


"She Makes Me Laugh" - Written by Rivers Cuomo, this was the first song to be released from the album. To be 100% honest, the first time I heard it, I thought "it's OK... not great, but not a disaster".  But then I listened to it a second time, and a third.  I began to like it more with each listen. I began to take notice of the lyrics... something about them.  Could the song really be about a father and his daughter, rather than a typical boy-girl song? Others began coming to the same conclusion.  I read some on line stories of men with daughters who began to get choked up listening to the song, remembering the good times they shared. This song could very well end up becoming one of the most requested songs at father-daughter dances. Micky's vocal is spot on, and it's so great to hear Mike's harmony with him (which actually gave me goosebumps!).  Peter also pitches in on backing vocals and contributes the banjo on the track. The track also includes an electric 12 string guitar riff, something that has become synonymous with The Monkees, even though in reality, the classic riffs from "Last Train To Clarksville", "Mary Mary", "Pleasant Valley Sunday", and others, were actually played on a 6 string with added reverb.

"Our Own World" - Written by the album's producer Adam Schlesinger (who, by the way, was responsible for "That Thing You Do" from the Tom Hanks movie of the same name), this song has more of a 1970s flavor, somewhat reminiscent of  Sheena Easton's "Morning Train". Micky sings lead with Peter and Mike on backing vocals, and Peter on keyboards. Great song.

"Gotta Give It Time" - Like the title tune, this one is more on the funky end. Written by Jeff Barry and Joey Levine, it features an old, unfinished backing track augmented with some new instrumentation and lead vocal by Micky with Mike and Peter on backing vocals. Another great track.

"Me & Magdalena" - This song, written by Ben Gibbard and sung by Mike with Micky on harmony, slows the pace and changes the tone of the album by being a more reflective song. A kind of slow tempo, bare bones country number, it has received rave reviews by many people.  I'm not as enthused by it as some other fans, but it's still a good album track. Perhaps it could have used some Headquarters type pedal steel guitar accents. (Note: I heard version 2 of this song, which has a stronger, driving beat and fuller instrumentation. I kind of like it better than version 1. I would have put version 2 on the album as it seems to be a better fit with the other songs, and I would have released version 1 as a single intended for country radio airplay.)

"Whatever's Right" - This initially unfinished Tommy Boyce-Bobby Hart tune is a real gem.  Micky brings the goods with his vocal, with killer background vocals by Mike, Micky's sister Coco and Bobby Hart, and Peter contributing some soulful keyboard work. The bridge is nearly identical to the bridge of "Apples, Peaches, Bananas, and Pears". One of the album's highlights, and that's saying something considering how high quality the whole album is.

"Love to Love" - I have to say this might be the album's weakest track. I understand the need to include a track representing the late Davy Jones. I would expect there should be one. But I think "Love to Love" was the wrong track. Not exactly an unreleased track, various mixes have been issued since the 1980s. In fact, the only difference in this mix is Davy's vocal was not doubled as in the other mixes, and Micky and Peter provide some minimal backing vocals. Although it was written by Neil Diamond, and I suspect that is the main reason it was included, it is a weak offering.  What I would have preferred (and perhaps this could be done for the next album) is to take Davy's vocal of "My Share of The Sidewalk", a tune written for him by Mike Nesmith, and remix it to include the breezier and more sweeping backing track from the Instant Replay Super Deluxe box set. Or, for a more innovative idea, take Davy's long forgotten 1970s solo cover of Gilbert O'Sullivan's "Who Was It" and build on that.

"Little Girl" - A completely different song than the Dolenz penned version from the 1969 album The Monkees Present.  This one, written and sung by Peter is kind of bluesy with a mixed tempo/beat. Peter, who is known for not really being the best vocalist of the group, turns in an excellent performance. Supposedly, Peter says he wrote this song back in the 1960s for Davy as a sequel to "I Wanna Be Free", although lyrically it doesn't seem to follow the earlier song's story line.

"Birth of an Accidental Hipster" - Many have stated this Noel Gallagher-Paul Weller penned song is the album's masterpiece. Sung by Mike with Micky and his sister Coco on harmony backing vocals, it starts out a lot like "Sweet Young Thing", but then evolves into something very reminiscent of the Beatles/Sgt Pepper/Magical Mystery Tour in sound and spirit only to again fade out with the "Sweet Young Thing" type rhythm. An amazing track.

"Wasn't Born to Follow" - This Carol King-Gerry Goffin track is another unfinished backing track from the 60s, with Peter adding banjo and his vocal. Great soulful performance by Peter, who has a long history with this song. Apparently he recorded a version with his post-Monkees band Release to be used in the movie Easy Rider (produced by Raybert, the creators-producers of The Monkees), but the version by The Byrds ended up being used instead.

"I Know What I Know" - Wow.  Just...wow.  This track, written and sung by Mike is simply beautiful. The lyrics and melody transcends rock 'n roll or pop music and goes to a whole new level, right up there with Cole Porter or Irving Berlin. One of the best tracks on the album.

"I Was There (And I'm Told I Had a Good Time)" - The closer is a song written by Micky with Adam Schlesinger based on a one-liner Micky has been using for several years. Like "Hipster", this song seems to have more of a Beatles influence, and could be seen as a novelty track (although it's no "Gonna Buy Me A Dog" or even my pick for a Monkees novelty track, "The Curly Shuffle"). Micky plays drums on this bluesy number and exclaims at the end he dropped his stick. A great way to end a fantastic album.  I can't wait for the next Monkees album!

There are three other bonus tracks I should briefly mention.  The best of the three is "Terrifying", a jangle pop tune written by Zach Rogue and sung by Micky, that is almost as good as all the other songs. I wish it would have been included on the album proper. Initially, it was listed as being on the album, but it was later dropped. On the other hand, Peter's "A Better World", written by his brother Nick, is a pleasant enough song, but has a "We Are The World" complex.  Perhaps the weakest of the three is "Love Is What I Want". It has a good production and vocal from Micky, but the problem is with Andy Partridge's lyrics and tune, which has too much of a nursery rhyme sound and cadence to it. The chorus sounds like a rip off of "Red Rubber Ball" by The Cyrcle. Micky singing his classic "Randy Scouse Git" during the fade out is priceless though.

Posted by Shazamaholic at 10:15 AM

Interesting review, this album is much better than it had any right to be, and I have been listening to it a lot since it came out. Love it.

I will quibble with you on a couple of points, I think 'Me & Magdalena' (slow version) is the best song on the album and I also dig Dave's song 'Love to Love' a lot. Despite being a huge fan for years and having the first 2 Missing Links album, I somehow hadn't heard this one yet, so it was a real treat for me.

Agree with most of your other points. Am not familiar with 'Who Was It' though, you've got me intrigued and I will seek out the song if I can find it.