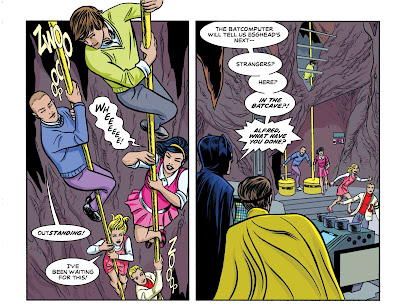 After the bad taste left by Batman '66 meets Wonder Woman '77, one would think it is great news to bring in Mike and Lee Allred, who produced the single best issue of the regular run of Batman '66 - its final issue. But it is kind of perplexing that the Legion of Superheroes were chosen to co-star.  I have to consider, was it supposed to be based on the Legends of the Superheroes TV specials, which would make more sense, and somehow, a misunderstanding resulted with the Legion of Superheroes instead?  The story opens with the Legion coming from the future to recruit the world's greatest teen superhero, Robin, to help them on capturing a villain, Universo, who time traveled to 1966.  Meanwhile Egghead discovers the Legion's time ships.  Batman goes with some of the Legion to the future to capture Egghead, while Robin leads the rest of the Legion in 1966 to capture Universo.  Hmm... Egghead and Universo sure look alike. In the future, Batman encounters a lot of classic silver age Legion scenarios, while in 1966, its alluded to the Legion may have come to an alternate timeline than the one they intended to go to.  Batman's team catches up to Egghead, who quickly comes back to 1966, where Universo has hypnotized Gotham's leadership. They realize Universo is Egghead's descendant and decide to team up.  Robin and his team try to save City Hall, and Batman and his team arrive back to help out. The artwork is absolute perfection, but the script reads more like a tribute to the Legion of Superheroes, with a real silver age feel, that guest stars Batman and Robin. While it is a definite step up from the previous Wonder Woman '77 debacle, if the rumors are true that this will be the final Batman '66 project, it ends on a wrong note. The franchise should end with a spotlight on Batman and Robin, not on the Legion. Hopefully there will be more Batman '66 projects after a brief hiatus to rethink the many flaws of the execution of the franchise. Hopefully Andy Fish will be brought in to create some of the new Batman '66 projects. This issue earns a B-.
Posted by Shazamaholic at 11:10 AM