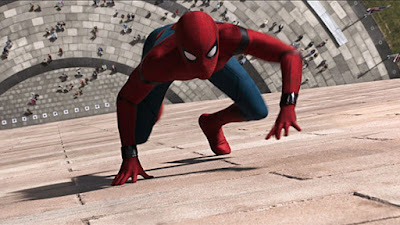 To start with the bottom line, Spider-Man: Homecoming is the best Spider-Man movie since Spider-Man II.  It is right up there with Captain America: The Winter Soldier as one of the best MCU movies to date. Like the Guardians of the Galaxy movies, it can be accurately described as an action-comedy.  Director Jon Watts wisely skips doing another retelling of Spidey's origin, which made the lackluster The Amazing Spider-Man feel like a rerun. On the contrary, this movie feels very fresh, and keeps much of the Sam Raimi tone and feel.  It can be considered a direct sequel to the first Avengers movie, as well as a follow up to Captain America: Civil War.

The film opens on Adrian Toomes eight years ago, just after the events in the first Avengers movie. Toomes' company has been hired to clear the wreckage, but is quickly shut out by Stark Industries who takes over.  Toomes decides to keep some of the alien tech and devises a plan to build and sell weapons. Skip to eight years later, and we see the events featuring Spidey from Captain America: Civil War, but from Spidey's viewpoint. Skip to a few months later, and Spidey is being your friendly neighborhood Spider-Man, cleaning up his neighborhood of crime while waiting to be called in for the next Avengers mission while also trying to juggle duties and responsibilities at school. As Toomes' weapons business grows, things escalate.  Unlike the Tobey Maguire and Andrew Garfield versions, there is a pivotal scene where Spidey needs to literally hold a sinking ferry together to keep it from sinking.  In similar scenes, the Maguire and Garfield versions would have triumphed, but in this version, Spidey is failing and needs to be bailed out by Iron Man.  It is a scene that proves this take on Spider-Man is just a kid sometimes in over his head. To teach Peter a lesson, Stark takes back the tech heavy suit.

Peter then concentrates on his normal life, becoming more concerned with scoring a date with Liz to homecoming, but the Vulture continues to complicate things.  Later, during the big final fight between Spidey and the Vulture, the alien tech Toomes made his wings from is going to explode.  Spidey tries to save Toomes, and when it explodes and Toomes is engulfed in fire, what does Spidey do?  Does he say something morally ambiguous like "I won't kill you, but I don't have to save you"? Does he break Toomes' neck, killing him? Does he stab him multiple times until he's dead?  No, Spidey runs into the fire and saves Toomes' life.  This is the action of a true superhero.

There are also some more blatant potshots at the DCEU, such as Parker's friend and sidekick Ned saying how he wants to be the "guy in the chair", a reference to CW TV show characters like Cisco (The Flash) and Felicity (Arrow), and the Stark designed tech heavy Spider suit going into an attack and kill mode, and into an intimidation mode, which allows Peter to speak in an over the top gravelly voice spoofing Christian Bale's Batman. Unlike Wonder Woman's amateurish CGI, the CGI in Homecoming is first rate and stellar.

Tom Holland is truly amazing as Peter Parker, and brings youth and energy and humor to the role. Although, for all the hype the film makers have made about setting the film in Queens, NY, Holland, who is British, does not speak with a Queens accent, instead using a generic, mid-Western non-accent. Actually, none of the previous Spidey actors really spoke with any kind of New York accent.  His costume is faithful to the early Steve Ditko artwork, and we for the first time ever outside of the comics, we get to see the webbing under Spidey's arms. Robert Downey Jr's Tony Stark mentors Peter, assisted by Happy Hogan (Jon Favereau, who gets more screen time than Stark despite how the trailers made it look), and there is a cameo by Chris Evans as Captain America, wearing his old costume from the first Avengers movie (but not "The First Avenger"), in a series of cheesy PSA's that were intended to be several years old and outdated.

Jacob Batalon does a good job as Ned, seeing how the film makers probably didn't want to reboot Harry Osborne again, but I thought his role could have been just a bit smaller. Tony Revolori's Flash Thompson re-envisions the character as an intellectual bully. Disney Channel actress Zendaya plays Peter's classmate Michelle, in a typically over-acted Disney Channel sit-com style, that thankfully isn't too big, but hints at a larger presence in upcoming movies (indeed, there seems to be some "bait and switch" regarding character names).  A much better performance is given by Laura Harrier as Peter's crush Liz, and perhaps the best of Peter's classmates is Angourie Rice as Betty Brant.

Michael Keaton turns in perhaps the best performance of a villain in an MCU movie.  With the exception of Loki, the MCU villains are mostly lackluster and seem like afterthoughts. Keaton shatters that mold, giving Toomes relatability, sympathy, and a cold as ice evil streak. The one big mistake was he didn't say the line "Pussy! Batman would never cry!".  Although to be fair, I think this is the first Spider-Man movie where Peter doesn't cry.  But those who hated Spider-Man III, be warned, Peter does try to dance in this one. Aunt May played by Marissa Tomei (who does have a natural NY accent), is probably the character altered the most from the comics. There is a running gag that has everyone hitting on her.  Unbelievably, this is the third Spider-Man movie in a row with no sign of J Jonah Jameson. A big plus is the classic Spider-Man cartoon theme song was revived. After the two awful Andrew Garfield misfires, it's great to see Spider-Man be amazing again.
Posted by Shazamaholic at 1:34 PM