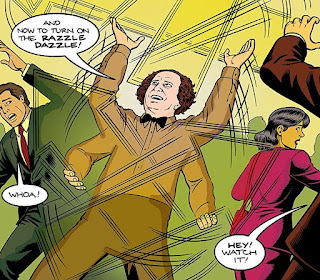 The latest issue of American Mythology's series of Three Stooges one-shots, all #1's, features two new stories written by S.A. Check and art by Brendon and Brian Fraim.  The first story has the boys selling home made souvenirs, and deciding to take a vacation. There are references to Shemp, but he's referred to as Larry's cousin (rather than Moe and Curly's brother).  The second story has the boys as contestants on a modern style TV game show.  The art on both stories is excellent, and the scripts are very good, but I wish they would move on from the Farrelly Brothers' concept of putting the Stooges in trendy and modern situations, and get back to stories inspired by the classic and timeless two-reelers.  The book is rounded out with two one-page strips reprinted from the 1960s, and a couple Stooge related articles. This issue gets a B.
Posted by Shazamaholic at 3:14 PM