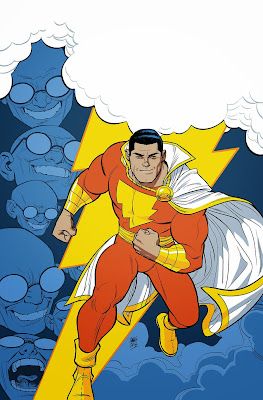 Just days after fan-favorite Captain Marvel candidate Derek Theler was cast as Mr Immortal in the upcoming TV series New Warriors, taking him out of the running for the role, several sources are announcing that World's Mightiest Mortal will begin production in February 2018.  These sources are assuming David Sandberg, who was the most recent name linked to the project, will direct despite no formal announcement he has signed on. What has been confirmed is Dwayne Johnson will not have any significant role, other than perhaps a teaser cameo, in the movie.  His Black Adam will only be featured in the solo movie of the same name, which as of yet, does not have any kind of production time table (and if Johnson is serious about running for president, may not have time to make the movie at all before he must suspend all film making activities to run).

This may signal that, in a departure from the recent Shazam reboots in the comics, where Captain Marvel and Black Adam are intrinsically linked, the film may go back to the original Fawcett source material, where Black Adam was not a pivotal role in Captain Marvel's origin.  It is also important to point out the reports say "production" will begin... not "filming". So I expect a director to be unveiled in the coming months as well as an announcement that a script has been approved, and for the casting process to begin in February.  Actual filming may being in Summer or early Fall of 2018. With an estimated 3 or 4 month shooting schedule, and then a similar amount of time needed for editing and post-production, I can't see them making the targeted April 2019 release date.  Even Summer 2019 would be cutting it close.  I expect the release date to change to sometime in 2020, which coincidentally, would be Captain Marvel's 80th Anniversary.
Posted by Shazamaholic at 1:02 PM